Bronco Round Up • November 2, 2021 • https://broncoroundup.org/19481/sports/bronco-football-plays-with-heavy-hearts-wins-high-desert-league-title/ 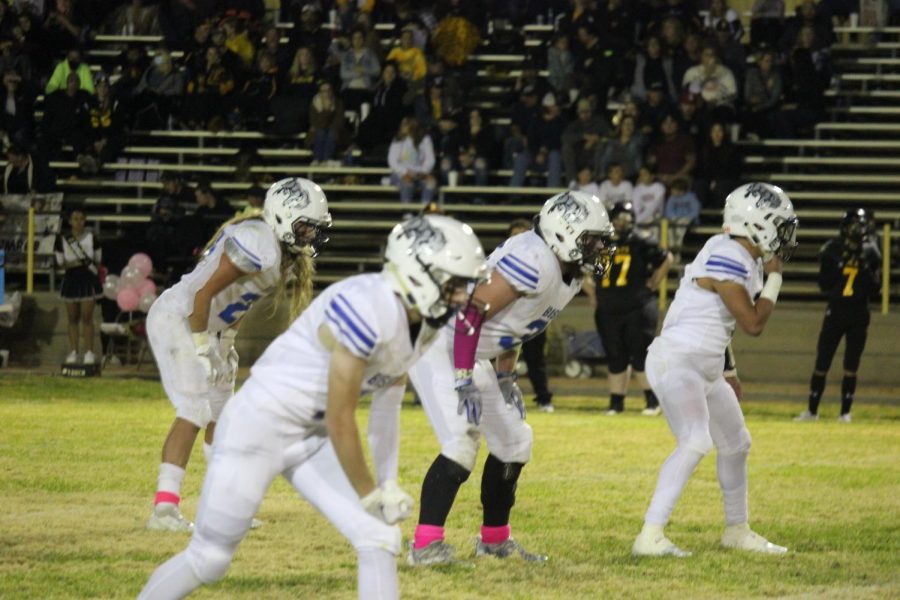 Bishop Union offense preparing to run a play at Boron.

The Bishop Broncos finished the regular season with a 20-6 win against The Boron Bobcats.

The Broncos took the High Desert League Championship and will go on to the playoffs in the 2nd seed. The Bishop Broncos will host The Tehachapi Warriors this Friday on 11/5.

Bishop Union will host former league rival Tehachapi Friday night. In the Boron Game the Broncos defense controlled the game from start to finish. The Bobcats lone score came on a kickoff return.

In League play the Broncos defense allowed just one score in 4 games. Kennedy Batchelder and Cain Omohundro had big games along with Reese Dondero. Carson Schmidt and Milton Michel had second half interceptions.

The Bronco offense was led by the duo of Quarterback Jakob Redmond and receiver Jake Frigerio. The seniors connected on two long passes. Senior running back Zach Mojarro added a touchdown run.

The Broncos made the trip to Boron only hours after hearing about the death of three local teenage girls.  Head Coach Arnie Palu indicates that the decision to play was made by the players, many of whom knew the victims or were related.

“I’m really proud of this team,” Coach Palu Said. “I didn’t know if we were going to be in a position to play Friday after receiving the news of the tragedy that took three lives in our community.  Football was really secondary Friday night.  The most important thing was keeping our team together to support one another.  There was not a member of our staff or team that was not hurting.  The way the team came together and played in spite of everything going on was truly amazing. Our collective heart is hurting for the families and for our community.”

This game also marked the end of the October fundraising drive for Eastern Sierra Cancer Alliance. With two interceptions and three more touchdowns the Broncos will donate a total of 245 dollars to the ESCA. Throughout the month of October the Broncos pledged to donate $5 for every touchdown, interception and sack.